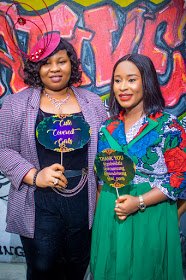 The maiden edition of the  Sarima City Hangout/Exhibition was amazing.

The hangout which is one of the many projects of Sarima City, a Christian Organization invested in leading the world to Christ began with an opening prayer and a briefing of the Orgarnizations focus  by the pioneer, Merit Gogo-fyneface.

The Exhibition began after  a Bible talk by Dr. Lulu , a lecturer at the University of Port Harcourt.

A total of thirteen vendors were in attendance such as;@perfecto_apparenza@imikanz_fashionhouae.@dmadery_stylehouse@veekiesdesigns @zrpphe

The event came to an end after a closing speech by the pioneer.

The Sarima City Hangout/Exhibition was sponsored by GIA BRIDALS  , a leading bridal dress store in Portharcourt, TECUMUS NIGERIA , the software specialists in Port Harcourt. PAMDRIVE NIGERIA also offered attendees ten percent off all rides to and from the event.

Other sponsors were AD_PORTS, the advert guru and YOLS AND J’S  FABRIC AND JEWELRY STORE.