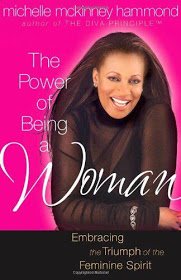 BOOK REVIEW : THE POWER OF BEING A WOMAN, MICHELLE McKINNEY HAMMOND